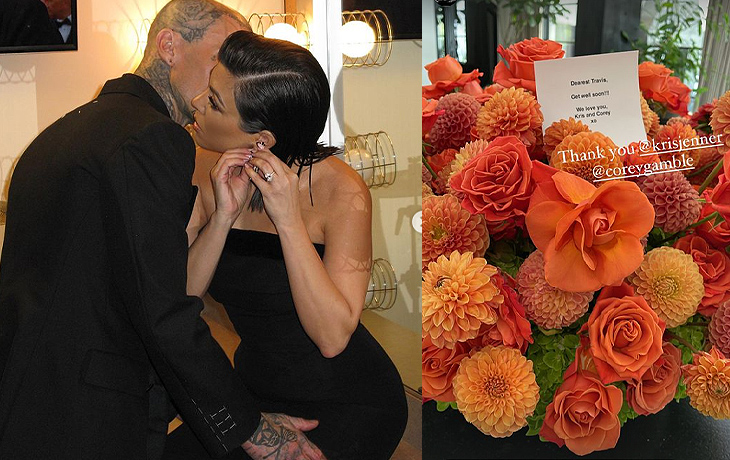 Travis Barker recently admitted to a Los Angeles hospital, disclosed that an endoscopic procedure led to the discovery of pancreatitis. The Blink 182 musician was in intense pain and was taken by his wife, Kourtney Kardashian, to Cedar Senai. Barker just uploaded a fresh message, notifying his followers of his recovery.

Travis shared a picture of a stunning flower bouquet that his mother-in-law Kris Jenner and Corey Gamble sent him on his Instagram story. The roses came with a letter that said, “Dearest Travis, get well soon.” In his report, Barker thanked Jenner and included a photo of the flowers. Previously, Barker thanked his followers for all the messages in a note describing his situation and providing an update on his health.

Along with a heart emoji, Kourtney Kardashian also uploaded a picture of the flowers her mother had delivered. Kardashian sent out a thank-you note to everyone who got in touch with her while Travis was in the hospital and said, “I am so grateful to God for healing my husband, for all of your prayers for him and us, for the overwhelming outpouring of love and support. I am so touched and appreciative.”

Atiana De La Hoya, Travis’ stepdaughter, also thanked the public for their love and support while Travis was in the hospital in a post on her Instagram story. After the drummer’s hospitalisation last week made news, his daughter Alabama shared a post saying: “Please send prayers”, which worried Barker’s fans about his health, sending them into a frenzy.