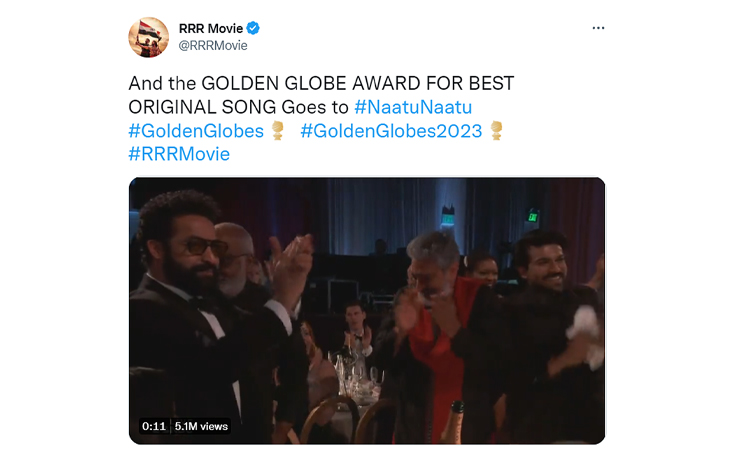 The Telugu movie RRR’s song Naatu Naatu made history by taking home the award for Best Original Song at the 80th Golden Globes. The famous song won against songs by Rihanna and Taylor Swift. Director SS Rajamouli, along with the actors Ram Charan and Jr. NTR, all jumped out of their chairs and raised their hands in joy when it was revealed that Naatu Naatu and RRR had won. As the entire table congratulated composer MM Keeravaani, their joyful reaction was captured on camera.

The video was posted to Twitter by the movie’s official account with the following caption, “And the GOLDEN GLOBE AWARD FOR BEST ORIGINAL SONG Goes to #NaatuNaatu #GoldenGlobes #GoldenGlobes2023 #RRRMovie.” The accompanying video features Rajamouli and the leading actors joyfully celebrating the film’s first Golden Globe victory. Rajamouli wore Indian attire with a red dupatta, while Ram and NTR wore all-black outfits. Ram’s wife, Upasana and NTR’s wife, Lakshmi Pranathi, were also sitting at the table.

The nomination was announced by the actor Jenna Ortega, who portrays Wednesday Addams in the Netflix web series. As the composer walked up to the podium, the trio cheered him. Numerous viewers, both international and Indian, praised the squad and the movie for their historic victory. Fans in the replies also uploaded GIFs of the celebrities dancing.

A supporter wrote, “Wow (wow emoji) #nattunattu wins Golden Globe award (okay, thumbs up and clapping emojis) Proud moment for Indians. I hope this gives that much need motivation to all Indian artists and moviemakers. Congratulations, #RRR.” The movie was screened over the weekend at Beyond Fest, and the event’s Twitter account responded,  “Legendary.”

While the team did receive one trophy, they lost another, so their reactions were mixed. The movie was also up for Best Non-English Language Film, but Argentina, 1985 took home the prize. The approaching Oscar nominations are still something to look forward to for the cast and crew, who recently attended their first significant Hollywood awards night together. Many anticipate that Naatu Naatu will win numerous more prizes and be nominated for an Oscar in the music category.