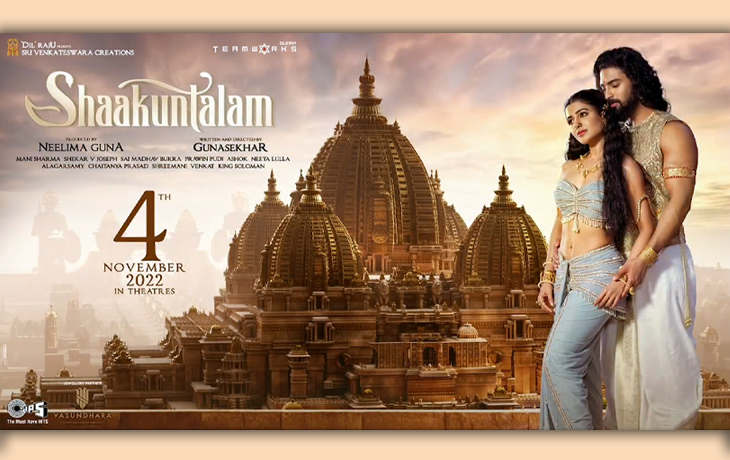 The movie’s producers have revealed the release date for Samantha Ruth Prabhu’s mythical love story Shaakuntalam. The eagerly anticipated film will debut in theatres on November 4 this year. The creators tweeted about the news, “Witness the #EpicLoveStory #Shaakuntalam in Theatres from November 4, 2022, Worldwide!”

The announcement poster shows Shakuntala portrayed by Samantha, and Dushyanta, represented by Dev Mohan, embracing. Along with Allu Arha as Prince Bharatha, the drama will also have Gautami, Ananya Nagalla, Mohan Babu and Aditi Balan in supporting roles. It is based on the famous play Shakuntala by Kalidasa.

The promotion for Shaakuntalam will start shortly, director Gunasekhar recently announced on Twitter. The project, which Gunasekhar conceptualized and directed, has the backing of the production company Gunaa Teamworks; Dil Raju Productions is in charge of handling distribution. The drama is still under post-production, and VFX will likely be used heavily.

Regarding the technical team for the movie, Mani Sharma composed the music for Shaakuntalam, while Prawin Pudi handled the editing section. For the film, Sekhar V. Joseph cranked up the camera.

The Hollywood movie Arrangements of Love and the new-age mystery Yashoda are also on Samantha’s schedule. Alongside Varun Dhawan, she will make her Bollywood debut in the movie Citadel, directed by Raj Nidimoru and Krishna DK.

Following Samantha’s social media break, rumours circulated that the actress has a rare skin disease and has gone to the US for treatment. Her manager shot down the words, telling Indian Express that the actress was fine and that the rumours were “just gossip,” but he did not speak of why the celebrity was travelling abroad.