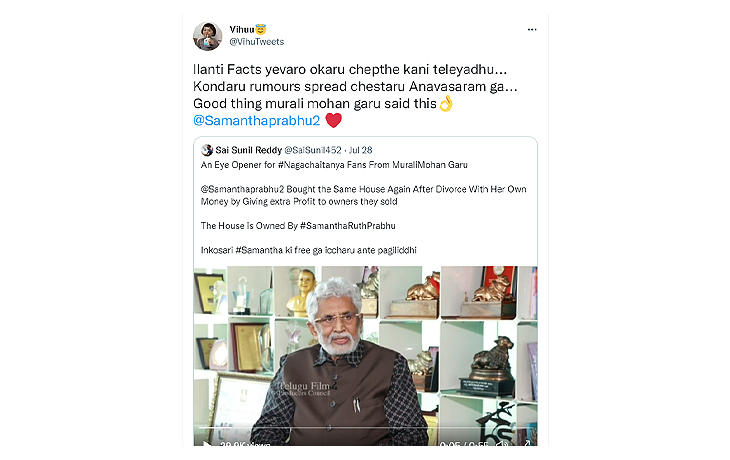 The most shocking news of the year was the divorce of Samantha Ruth Prabhu and Naga Chaitanya. ChaySam’s supporters were devastated to see their favourite couple parting ways. According to actor Murali Mohan, Sam has repurchased the home for a considerable sum after the former couple reportedly sold it during their divorce.

The two made their separation public in October of last year. The actress posted on Instagram, saying, “To all our well-wishers. After much deliberation and thought, Sam and I have decided to part ways as husband and wife to pursue our paths. We are fortunate to have a friendship of over a decade that was the core of our relationship, which we believe will always hold a special bond. We request our fans, well-wishers, and the media to support us during this difficult time and give us the privacy we need to move on.”

Returning to the topic, star Murali Mohan claimed during a recent interview with the Telugu Film Producers Council that Samantha recently brought the home she shared with Naga Chaitanya back. According to reports, the couple sold the house to someone, but Sam now owns it after giving the buyers more money.

Sam recently discussed the worst rumour she has ever heard about her on Koffee With Karan 7. She conveyed to Karan Johar, “That I took 250 Crore in alimony. Every morning I woke up waiting for income tax officials to show them there was nothing. First, they made up the story about alimony. Then they realised it didn’t seem like a believable story. Then they said there’s a prenup, so she can’t ask for alimony.”

On the work side, Naga Chaitanya’s most recent film, Thank You, was not well appreciated by the public. However, Samantha will appear alongside Vijay Deverakonda in Yashoda and Kushi.

Aamir Khan and Kareena Kapoor Khan’s made five spicier confessions on season 7 of Koffee With Karan.