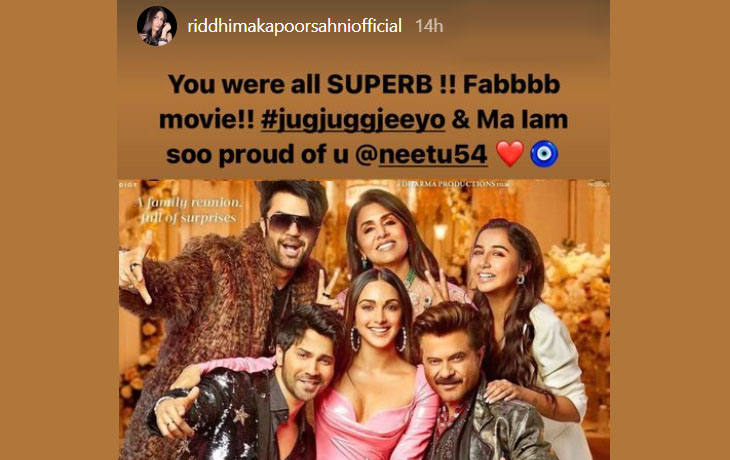 JugJugg Jeeyo will release on Jun 24, 2022.  The release has been anticipated by the audience of the movie JugJugg Jeeyo ever since it was announced. Varun Dhawan, Kiara Advani, Anil Kapoor, and Neetu Kapoor play significant parts in the film. The main cast is doing everything possible to promote their eagerly awaited movie. Manish Paul and Prajakta Koli have substantial roles in the film as well.

Concerning it, Neetu Kapoor’s daughter Riddhima Kapoor Sahni recently saw the movie and wrote a kind review about it. In the sincere letter, she also gave her mother compliments.

Riddhima published the movie’s poster on Instagram and added the following caption: “You were all SUPERB!! Fab Movie !!! JugJugg Jeeyo & Ma, I am so proud of you”. On Instagram, Neetu Kapoor reshared her daughter’s review and said, “Thank you”.

The comedy-drama film JugJugg Jeeyo is supervised by Raj Mehta, who directed the 2019 mega-hit Good Newz starring Akshay Kumar and Kareena Kapoor Khan. It is produced by Viacom18 Studios and Hiroo Yash Johar, Karan Johar, and Apoorva Mehta under Dharma Productions. On June 24, 2022, the movie is planned for theatrical release.

Luxurious Video Production House With All The Modern Amenities In Gurgaon