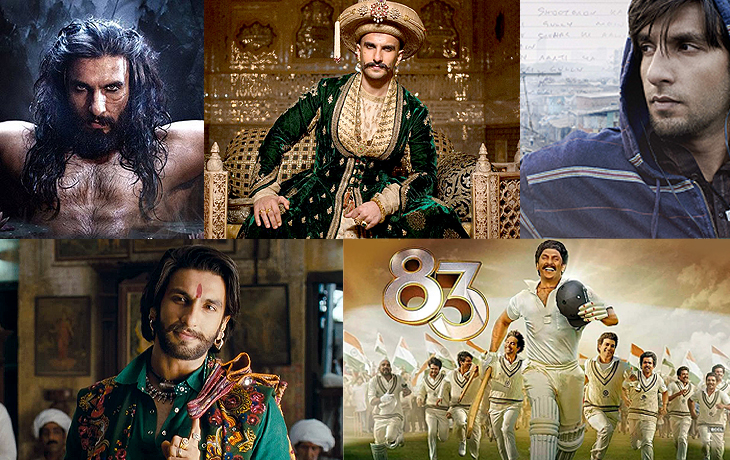 On this special occasion of Ranveer Singh, find out why he is the most versatile actor!

There is no denying that Ranveer Singh is a genuine star. The actor has developed into one of the most promising performers in recent years after working in the entertainment industry for more than ten years. The actor turned 37 today! The actor made his Bollywood Debut in 2010 with the movie Band Baaja Baaraat and ever since, he didn’t stop impressing his fans with his versatile acting.

Check out some fantastic performances done by him on the silver screen!

Padmaavat: Sanjay Leela Bhansali’s Padmaavat was one of the best films of Ranveer Singh. He is remembered for his villain role, where he played a decisive and hungry Alaudin Khilji who gets mad behind Queen Padmavat, wife of noble King Ratan Singh. The actor was so engrossed in the role that he locked himself in a room to master his role.

Bajirao Mastani: Another fantastic performance that will be remembered is Bajirao’s role in Bajirao Mastani, released in 2015. The actor did full justice to the part and accent.

Ram Leela: This movie was remarkable as the actor was really appreciated for the unique role he played for the first time. Later, there was no stop. He played a part of a passionate lover with actress-wife Deepika Padukone, which created a considerable buzz.

Gully Boy: Film by Zoya Akhtar, Ranveer played an outstanding role of an aspiring street rapper Murad Ahmed. He even rapped for the film and was highly appreciated for the same. The movie also made it to the Oscars nomination.

83: Directed by Kabir Khan, ‘83’ is a biopic of Kapil Dev, who led the world cup winning team. The actor did a fabulous job and won the heart of the fans again.