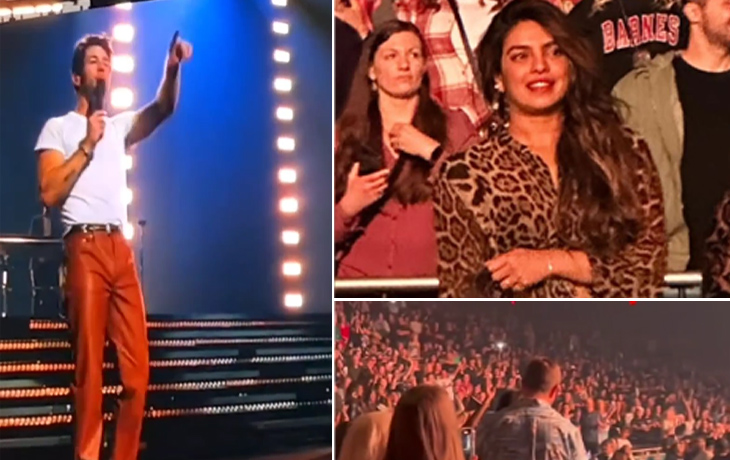 Priyanka Chopra and American artist Nick Jonas got married In December 2018. Since then, they have garnered headlines worldwide for many reasons. PeeCee and Nick Jonas have constantly shown their affection for one another on social media. The Dil Dhadakne Do actress, who just returned from a trip to India, went to the Jonas Brothers concert on Sunday to support her husband, Nick Jonas.

Nick acknowledged his “wife,” Priyanka, who was standing in the audience supporting him during the performance. According to him, one of the songs was performed by his brother at their Indian wedding. Nick revealed, “He sang this at me and my wife’s wedding.” Soon after, fans clapped for them, and Priyanka, who was part of the audience, had a priceless reaction. The actress was spotted wearing an animal print top and denim jeans to the show and added a black leather jacket.

On Sunday, Priyanka posted a picture of herself and Nick strolling through Las Vegas on her Instagram Stories. She shared the image with her fans and captioned it, “Vegas nights with bae.” They were facing the camera with their backs to it, faces hidden.

In the meantime, Priyanka will next be seen in the musical Love Again, in which she co-stars alongside Sam Heughan and Celine Dion. Additionally, she owns the Russo Brothers’ series Citadel. The soon-to-be-released science fiction drama will debut on Prime Video’s OTT platform. Alongside Alia Bhatt and Katrina Kaif, she will star in Farhan Akhtar’s road trip movie Jee Le Zaraa. Following the 2019 film The Sky Is Pink, this also represents Priyanka’s return to Indian cinemas.