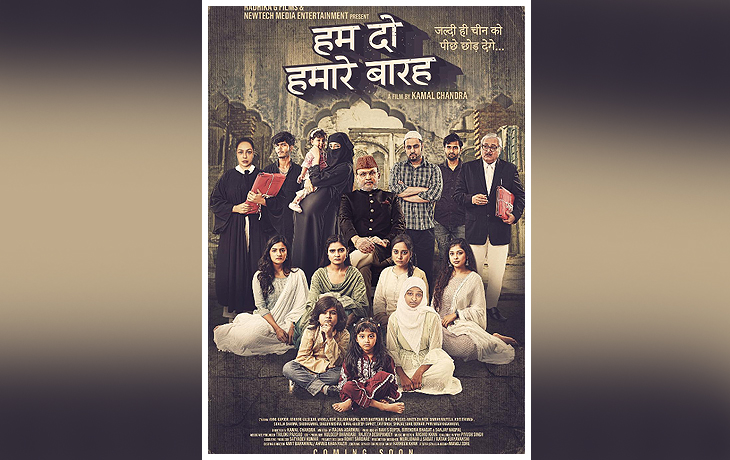 Filmmaker Kamal Chandra revealed his new movie, “Hum Do Hamare Baarah,” about the divisive topic of population increase within the Muslim community on Friday, August 5.

Annu Kapoor, a recipient of a National Award, plays the protagonist character in the social drama film. In addition to Kapoor, Manoj Joshi and Ashwini Kalsekar will play significant roles in the movie.

“Producers: Ravi Gupta, Birendra Bhagat & Sanjay Nagpal. Director: Kamal Chandra. It stars Annu Kapoor, Ashwini Kalsekar & Manoj Joshi,” he continued. The first poster for the film portrays Annu Kapoor as the patriarch of an 11-member Muslim household while his pregnant wife stands next to him.

The slogan “Jaldi Hi Cheen Ko Picche Chhod Denge (We shall soon leave China behind)” is included with the movie’s title, “Hum do Hamare Baarah (We two and our 12 children).” ‘Journalist’ Rana Ayyub led the group of Islamists in criticising the socially conscious films as ‘Islamophobic’ shortly after the poster’s release.

She tweeted, “How does the censor board allow a film like this that depicts Muslims as the reason for population explosion and extends the relentless attack on the community. The brazen hate and Islamophobia when they use the image of a Muslim family and call it ‘Hum do Hamare Baarah’.”

The movie “Hum do hamare Baarah” has not yet been released. Once it opens in theatres, though, it will probably cause much more debate.

Hina Khan motivates her followers with a glimpse into her workout routine.

“I Have Grown To Love Ranveer Singh,” Pens Karan Johar