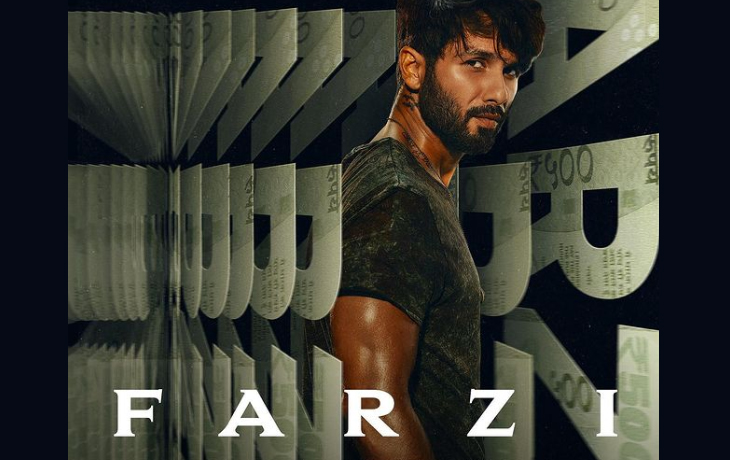 On February 10, 2023, Prime Video will launch the criminal thriller Farzi. Shahid Kapoor and Vijay Sethupathi make their digital debuts in the web series, which also stars Shahid Kapoor. In the posters released along with the date announcement, Shahid is depicted as a con man, and Vijay will portray as a law enforcement officer tasked with finding him.

The streaming platform posted two posters featuring the stars. The first guy asks, “Con hai ye farzi? #Farzi #FarziOnPrime.” While in the poster,  Shahid can be seen wearing a dark grey T-shirt with the title Farzi written in Indian currency. The actor is facing the camera while speaking. Emojis for the fire was added to the post by excited followers. One admirer wrote, “Shahid Kapoor being badass is all I want to see.” One more questioned, “Ye post to farzi nahi hai na?

In the second poster, Vijay appears to be determined. The caption reads, “Here to uncover the asli behind the Farzi #Farzi #FarziOnPrime.” The actor is standing in front of the same currency symbol background as Shahid while holding a gun and sporting a dark blue blazer. Regarding the cast of the show, fans wrote, “Bawaal casting. One more fan stated, “This is going to be fire.”

Along with them, Raashi Khanna, Kay Kay Menon, Amol Palekar, a newcomer Bhuvan Arora and Regina Cassandra all play significant roles in Farzi. The series was created by the directing team of Raj Nidimoru and Krishna DK and is made under the D2R Films banner. The Family Man, a popular Prime Video series starring Manoj Bajpayee, was first produced by them.

The upcoming eight-episode series is described as an “edgy, one-of-a-kind crime thriller, a fast-paced. Stitched around a smart underdog street artist’s desire to scam the system that favours the rich, with the filmmaker duo’s trademark humour.” Raj & DK, Sita R Menon, and Suman Kumar collaborated on the writing of Farzi, which will centre on Shahid and Vijay’s cat-and-mouse game in which losing is not an alternative.

Raj & DK, the show’s makers, stated, “After a massively successful association with Prime Video for The Family Man, we are thrilled to return with our next new series! It’s one of our favourite scripts, which we have created with a lot of passion and shot through the ups and downs of the pandemic. Basically, a lot of sweat and tears have gone into making this series. After The Family Man, we challenged ourselves to create yet another exciting, unique world. We can’t wait for everyone to watch this series that’ll be out on Prime on February 10.”