Fans call Varun Dhawan and Anil Kapoor’s episode of Koffee With Karan 7 the “most genuine and funny.” 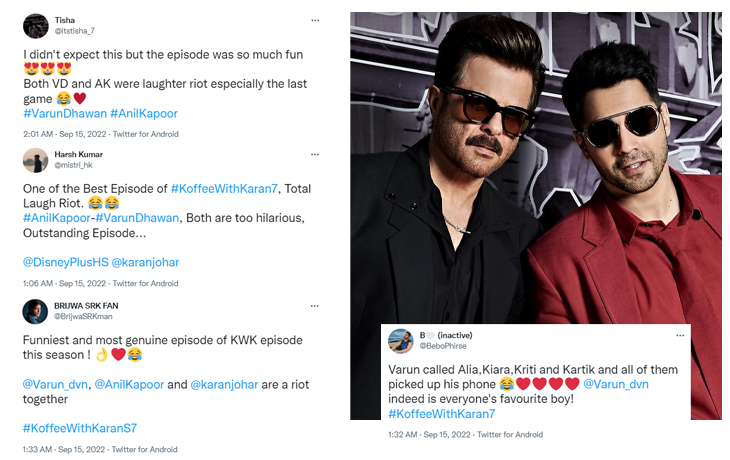 Varun Dhawan and Anil Kapoor were the most recent celebs to appear on Season 7 of Koffee with Karan. The JuggJugg Jeeyo duo discussed various topics, including infidelity, insecurities, role-playing, marriage, nepotism, and much more, throughout the almost hour-long episode. Soon after the show aired, this hooked online viewers, who promptly booked the show. Reactions poured in, and stories highlighting Koffee With Karan 7 followed. A fun and exciting episode was assured with Varun and Anil.

As the program came to an end, viewers commented on social media. They were also referred to as Bollywood’s “most entertaining” pair. It has been popular on social media since last night, and internet users loved the episode starring Varun Dhawan and Anil Kapoor. The most recent KWK7 episode received a huge thumbs up from online users, who also stated, “I didn’t expect this, but the episode was so much fun. Both VD and AK were laughing riot, especially the last game.” Added by another user, “Funniest and the most genuine episode of KWK episode this season! @Varun_dvn, @AnilKapoor and @karanjohar are a riot together#KoffeeWithKaranS7.”

The Badlapur actor Varun will be seen with Janhvi Kapoor on the professional front in Bawaal. He and Kriti Sanon have Bhediya as well.

Neil Bhoopalam As Jeet And Tushar Pandey As...