BTS’ V, Choi Woo Shik, Park Hyung Sik, Park Seo Joon, And Peakboy Will Team Up For A Spin-Off Of ‘In The SOOP.’ 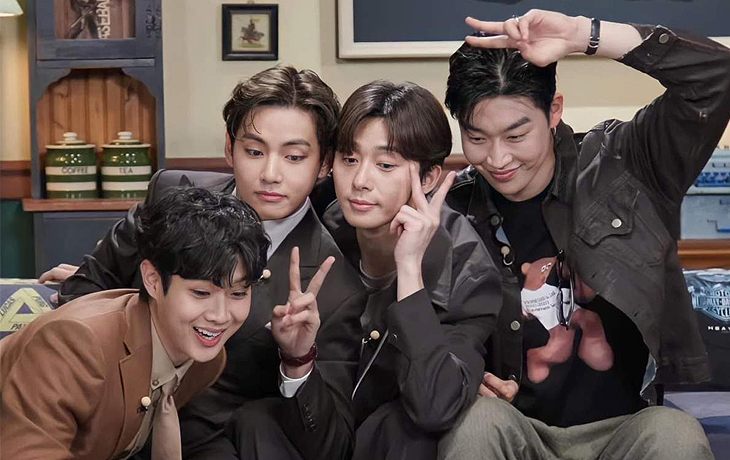 The much-loved Wooga Squad is gearing up for a new reality programme! According to South Korean media sites BTS’ V, actors Park Seo Joon, Choi Woo Shik, singer Peakboy and Park Hyung Sik, who are known to be best friends and have maintained a long connection, will star in a spin-off of HYBE’s entertainment reality show ‘In the SOOP.

In previous editions, two seasons of BTS and one season of SEVENTEEN were released, and the Wooga Squad will return in the upcoming spin-off, titled ‘In the SOOP: Friendship Trip’. The ‘healing reality’ series depicts artists’ time ‘between daily life and relaxation,’ as they take a few days to relax and recuperate while surrounded by nature’s tranquilly.

‘In the SOOP: Friendship Journey,’ premieres in July, will follow BTS members Park Hyung Sik, Park Seo Joon, Choi Woo Shik, and Peakboy as they embark on a three-night, four-day trip after a friend’s unexpected request. The spin-off will reveal the five friends’ mundane daily lives in a natural environment and the true me that emerges when they are together.

This extraordinary journey of the five friends who have kept their friendship in the entertainment industry will be shown through the show, which will take them back to the days of their gloriously shining youth. The four-episode series ‘In the SOOP: Friendship Trip’ will premiere in July. The show will be on JTBC and available via VOD on a global OTT platform.

Keep an eye out for additional information!

Ranbir Kapoor Claims He Hasn’t Changed Much Since Marrying Alia Bhatt: I Hadn’t Realised We Were Married Until Now