Popular
“Aditya Dhar, You’re The Biggest Blessing In Life,”...
Ajay Devgn And Varun Dhawan Praise Each Other...
Dhanush And Sekhar Kammula Collaborating For A Trilingual...
Exclusive Interview: Ravindra Parekh, a Writer, Poet and...
Tiger 3: Salmaan Khan to reunite with actress...
Tahira Kashyap States that she borrowed money from...
Kartik Aaryan Is Spooky In Freddy’s New Teaser
Mahesh Babu Pens A Heartfelt Note For His...
Ranbir and Alia disclose the name of their...
Anand L Rai on Akshay Kumar’s Raksha Bandhan’s...
Home Bollywood news Actress Rambha And Her Kids Injured In A Road Accident
Bollywood news

Actress Rambha And Her Kids Injured In A Road Accident 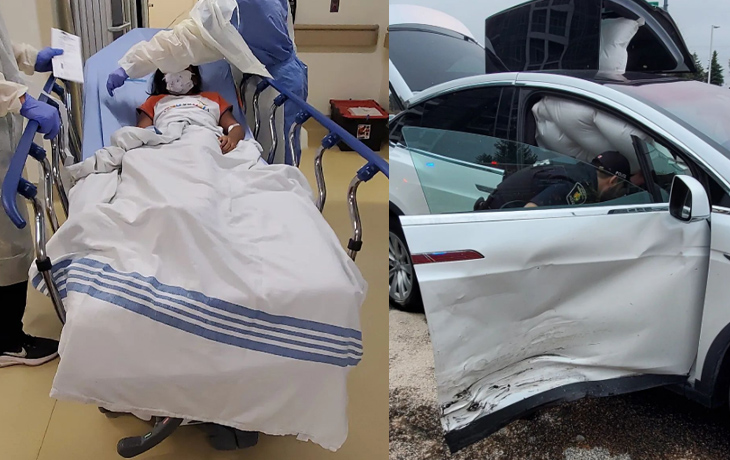 Everyone in the automobile suffered only minor injuries in the collision, which involved veteran actress Rambha, who is well-known for her prolific work in South and Hindi films.

Sharing pictures of her car crash, which took place in Canada, actress Rambha wrote, “Our car was hit by another car at an intersection way back from picking kids from school! “Me with kids and my nanny. “All of us are safe with minor injuries. My little Sasha is still in the hospital. Bad days bad time, please pray for us; your prayers means a lot #pray #celebrity #accident#family#pray#kids#children”

The actress also shared images of her wrecked vehicle and her young daughter, who was being treated in a hospital.

Following a collision with her vehicle at an intersection in Canada, Rambha, her children, and the nanny managed to flee with minor injuries. With her husband and three children, the actress, who at one point was a leading lady in the Tamil and Telugu cinema industries, currently resides in Canada.

The actress claimed the mishap happened while driving home after picking up her children from school.

Indrakumar Pathmanathan, a Sri Lankan Tamil businessman living in Canada, and Rambha were married in 2010 at the Karnataka Kalyana Mandapam in Tirumala. They made Toronto their home. They have a son and two daughters.