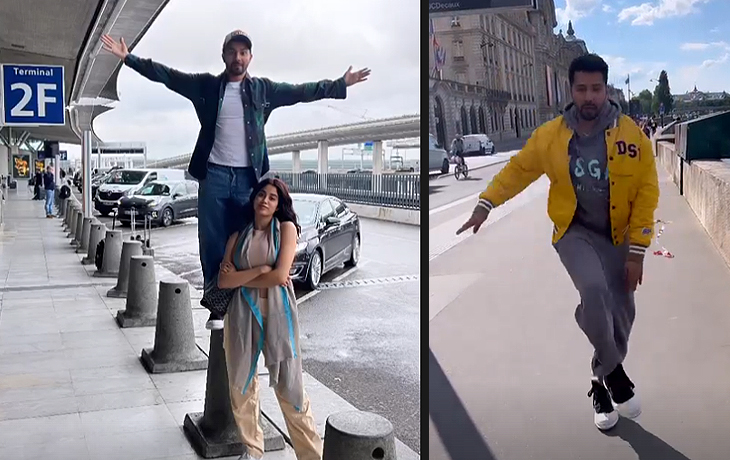 Varun Dhawan is on a roll right now, and deservedly so. The actor, who was most recently seen in the 2020 film Coolie No 1, has a diverse filmography. The Humpty Sharma Ki Dulhania actor is presently preparing for the premiere of Raj Mehta’s JugJugg Jeeyo, in which he stars with Kiara Advani, Anil Kapoor, and Neetu Kapoor. Varun is also filming Bawaal, directed by Nitesh Tiwari and starring Janhvi Kapoor, released on April 7 of next year. Varun’s first cooperation with Janhvi is for this film, and the cast and crew have just arrived in Paris to begin filming.

Varun has now shared a photo of himself having a good time in Paris with Janhvi. The Street Dancer 3D star uploaded a picture of himself and Janhvi at the Paris airport on his Instagram account. Janhvi was dressed in beige attire with white sneakers, and a grey stole in the photo. On the other hand, Varun was spotted in the backdrop, standing on a pole, looking ecstatic to be in Paris. Varun was seen on the streets of Paris grooving to the tunes of Rangisari from JugJugg Jeeyo in another post. He was dressed smartly in a grey t-shirt and pyjamas, which he teamed with a yellow jacket.

Lawrence Bishnoi is being investigated by Delhi Police after a death threat was made against Salman Khan. The gangster denies involvement in the letter.