Marathi Film De Dhakka 2 Music and Trailer Is Out 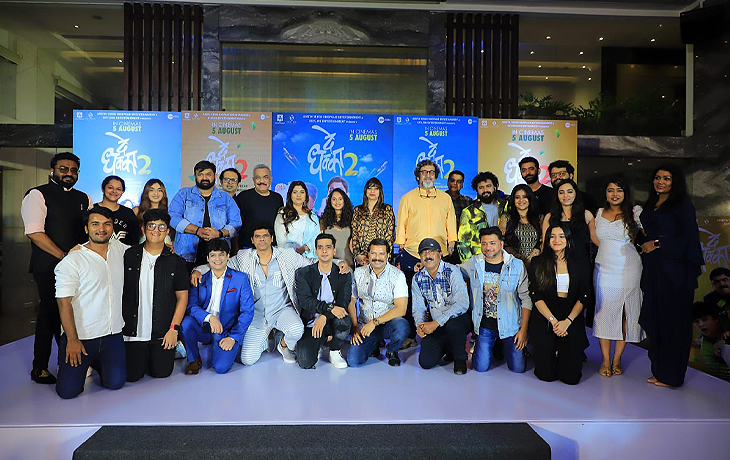 The wait is over ! Ameya Vinod khopkar Entertainment & Skylink Entertainment launch the Music & Trailer of De Dhakka 2 that leaves you in splits Some films don’t only leave a mark at the box office but also succeed in making an impression on the minds of the fans. One such is “De Dhakka”. The film received a lot of love from the fans and it is now time for ” De Dhakka2″ to hit screens on August 5. After the teaser getting a huge response , it’s now time for the Music & trailer of ” De Dhakka 2″.

The iconic and successful first film in the franchise De Dhakka (2008) was helmed by Atul Kale and Sudesh Manjrekar. Starring Makarand Anaspure, Siddharth Jadhav, Shivaji Satam, Medha Manjrekar, Sanjay Khapare and Saksham Kulkarni, the film was about a crazy family’s journey in an auto-rickshaw in a village in Maharashtra.

On the Event of Music and Trailer launch of De Dhakka 2 . Ameya Khopkar launches the logo of his new Distribution Company named “Filmastra”. along with Amol Kagne and Pranit Waykar.

De Dhakka 2 is Produced by Yatin Jadhav and Swati Khopkar. Co-produced by Ninad Nandkumar Battin and Tabrez Patel .
Associate Producer Karmika Tandon and Vishistha Duseja. The film is all set to release on 5th August 2022.

Swapnil Joshi’s Talks About Taking an Off After...

Tejasswi Prakash shares the poster of her Marathi...

Mahesh Manjrekar Announces The Release Date Of The...