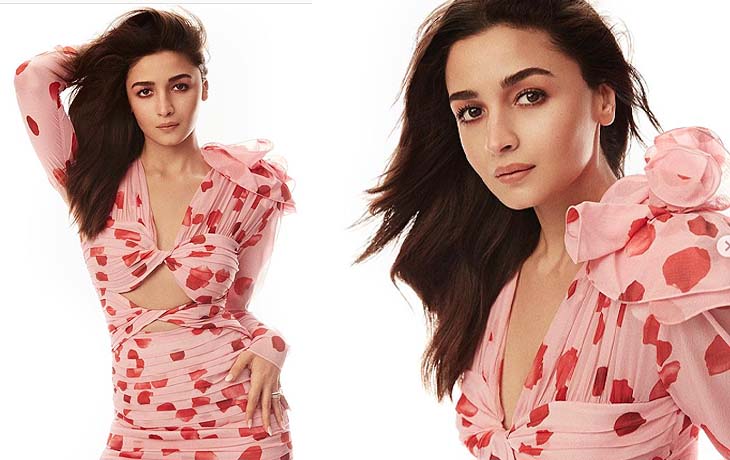 All eyes have been on Alia Bhatt since she announced that she and Ranbir Kapoor were expecting their first child. Everyone is anticipating the start of the new season of Koffee With Karan and the disclosure of some celebrity secrets because the show has been renewed for another season. As is previously known, one of the episodes will feature both Ranveer Singh and Alia’s Rocky Aur Rani Ki Prem Kahani co-star. When she uploaded a photo of her show dress on her Instagram account today, we noticed her engagement ring.

The beautiful actress can be seen in the photos sporting a pink dress with red hearts printed on it. She shared multiple pictures of herself standing in various positions, wearing red shoes and hair down. Alia does have a lovely appearance. Alia posted this image and said, “how I sipped some koffee this year.” If you pay close attention to her close-ups, you can see a big diamond ring on her finger. This has to be one of the gorgeous rings fans have seen in a while, and it wouldn’t be inaccurate to say so.

The actress will co-star with Ranveer Singh in the film Rocky Aur Rani Ki Prem Kahani. There are reports that the pair will travel to Austria to film a song for which Vaibhavi Merchant will choreograph. Famous actors like Shabana Azmi, Jaya Bachchan, and Dharmendra can be seen in Rocky Aur Rani Ki Prem Kahani. It also signifies Jaya and Dharmendra’s co-star reunion following a 48-year gap. In the film, Shabana Azmi also plays a crucial role. The film is expected to be premiered in February 2023, and production officially began in July 2021. Alia will also appear in the September 9 release of Brahmastra, which stars Ranbir Kapoor.

“Thanks To Debmatta And The Entire Cast Working For Mithai Is A Blessing In Disguise, Says Lead Actor Aashish Bharadwaj