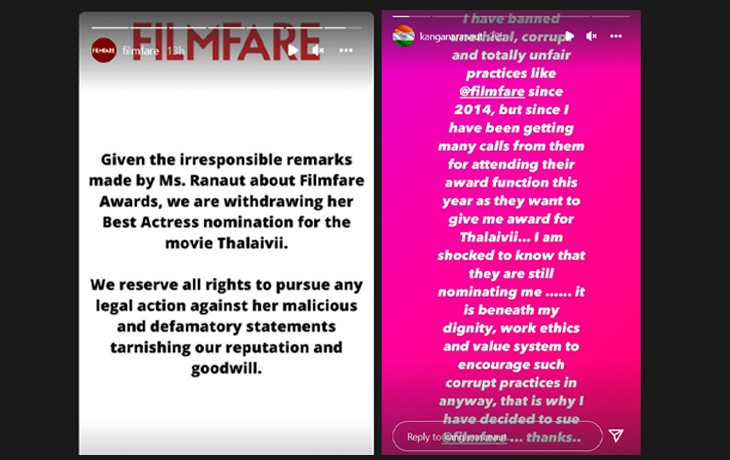 Bollywood actress Kangana Ranaut said that the Filmfare Awards nominated her for Best Actress despite having promised her an award in the specific category over “several phone calls.” They have now removed their nomination.

It asserted that they only contacted her to inform her about the nomination for Best Actor in a Leading Role, Female category. They asked for her address to send across the invitation to the awards ceremony, which will take place at Jio World Convention Centre at BKC, Mumbai, on August 30. The Filmfare awards categorically rejected Kangana’s allegation as a “patently false accusation” in a lengthy statement on its official Instagram.

“Given the irresponsible remarks made by Ms Ranaut about Filmfare Awards, we are withdrawing her Best Actress nomination for the movie Thalaivii. We reserve all rights to pursue any legal action against her malicious and defamatory statements tarnishing our reputation and goodwill”, read Filmfare’s statement.

Kangana has now criticised the disputed prizes once more and announced that she would be suing them. Reacting to the statement from Filmfare, Kangana wrote, “@filmfare has finally withdrawn my best actress nominations, thanks to everyone who supported me in this fight against the corrupt system, but this doesn’t stop me from taking legal action against them… I endeavour to end these unethical practices and stop such malicious award shows…see you in court @filmfare.”

Godfather Teaser Out On Chiranjeevi’s Birthday